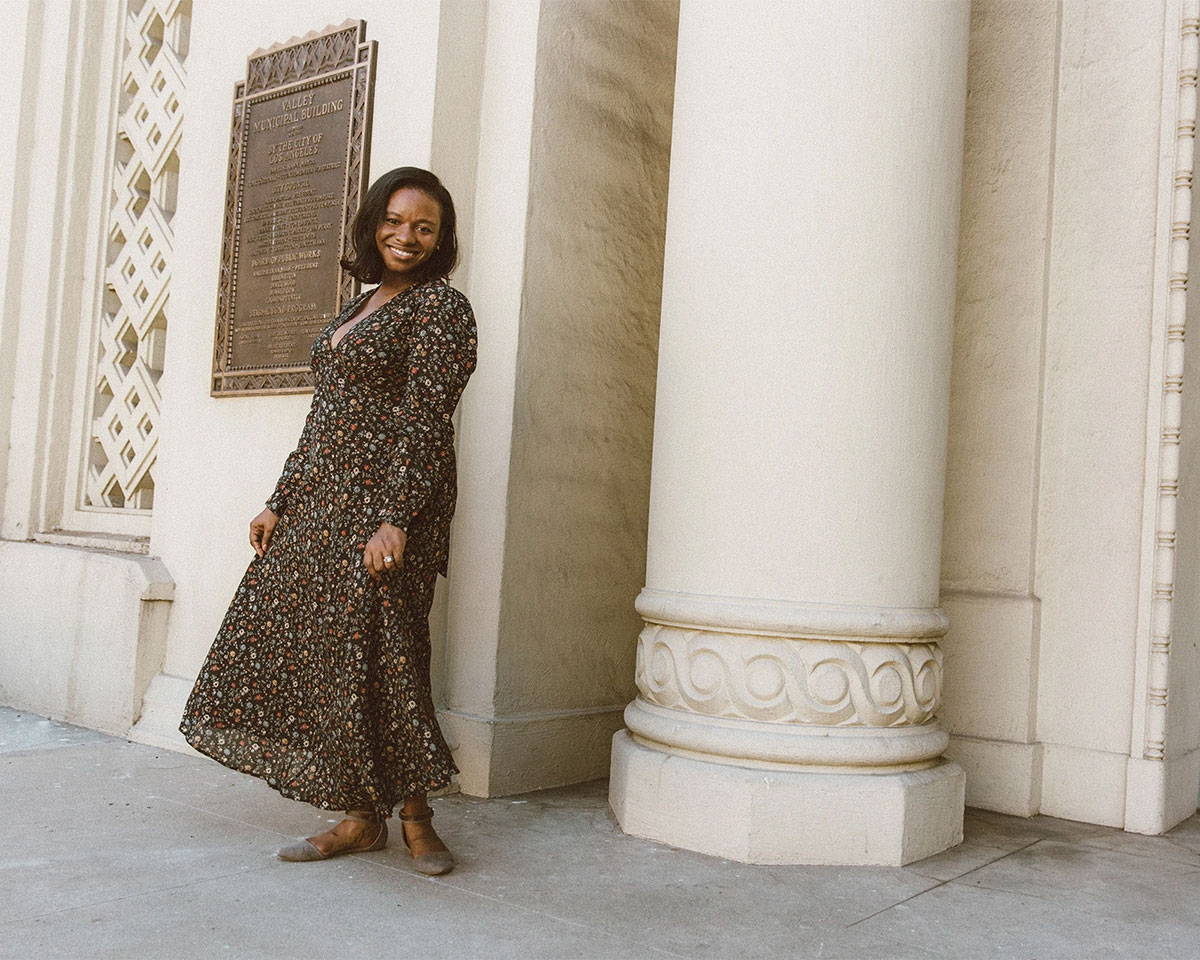 In mid-October, just weeks before the November 3rd election, our friends Brady and Katy of Wall for Apricots (journal on them coming soon!) introduced us to a candidate who is running to represent their district in the California Assembly: Lanira Murphy. Moved by Lanira’s story, approach to political and local change, and - perhaps most importantly - by her platform, we were immediately inspired to feature her here on our journal, shining a light on her campaign ahead of Election Day and sharing just a bit of her powerful vision for a brighter future.

We met Lanira at Van Nuys City Hall, just blocks from our offices (which happen to be in her district!) to chat with her about her experience running for office, hear more about her hopes for LA's District 46, and snap a few quick photos before she headed off for a full day of campaigning. Lanira's optimism, sincerity, and determination were a true breath of fresh air - just the dose of hope we needed as we head into the last moments of this tumultuous election season. See below for some words from Brady and Katy, as well as a brief excerpt of their conversation with Lanira. To learn more about Lanira and to donate to her campaign, visit her website here - and, for those of you in LA's District 46, be sure to look out for her on your ballot!

"Back in September, during a particularly anxious time in the election cycle, we saw an Instagram post that caused us to stop scrolling - 'Politics at its most effective is listening, communicating, listening, service, listening, and hard work.' - @lanira4assembly. We had stumbled across Lanira Murphy, candidate for California State Assembly District 46. After a quick google search and a deeper instagram dive, we realized that not only did we both live in District 46, but Lanira was exactly the kind of candidate we had been waiting for to represent us.

A former teacher with a Master’s in political communication, Lanira is passionate about reforming our political systems so that they work for the communities they represent. Her energy and integrity re-invigorated us at the local level and we impulsively sent her campaign an email. The very next day we spoke to Lanira herself. Her candor, her motivation, and her willingness to actually TALK to her constituents was a refreshing burst of sunshine in a dark political climate.

We had the honor of hosting a community Zoom for Lanira a few weeks ago. After expressing her frustration with the lack of engagement she’d felt from our current representative, she said “I decided that I want to be a part of the solution. I want to be part of the change.”

Over the course of our conversation that evening, Lanira presented a pragmatic and compassionate vision for our district that includes healthcare for all, reforming our police and criminal justice systems, improving credentialling programs for teachers and administrators, increased resources in our education system, and reallocating the city’s budget. She answered each question with a teacher’s patience and a detailed understanding of how she intends to approach the State Assembly, if elected.

Lanira is running an uphill race against an incumbent who has grown increasingly complacent after eight years in office. Her opponent has raised hundreds of thousands of dollars from special interest groups, and has a record of protecting those groups when votes come to the floor. Lanira has pledged to not accept money from police, oil industry interest, or big pharma. Lanira is committed to fighting for her community and we would love to see our District 46 friends unite around her campaign. Through her example, Lanira has motivated us to participate in our communities, to listen to our neighbors, and to believe in the power of a grassroots campaign.

See below for some of the most powerful moments from our conversation with Lanira." 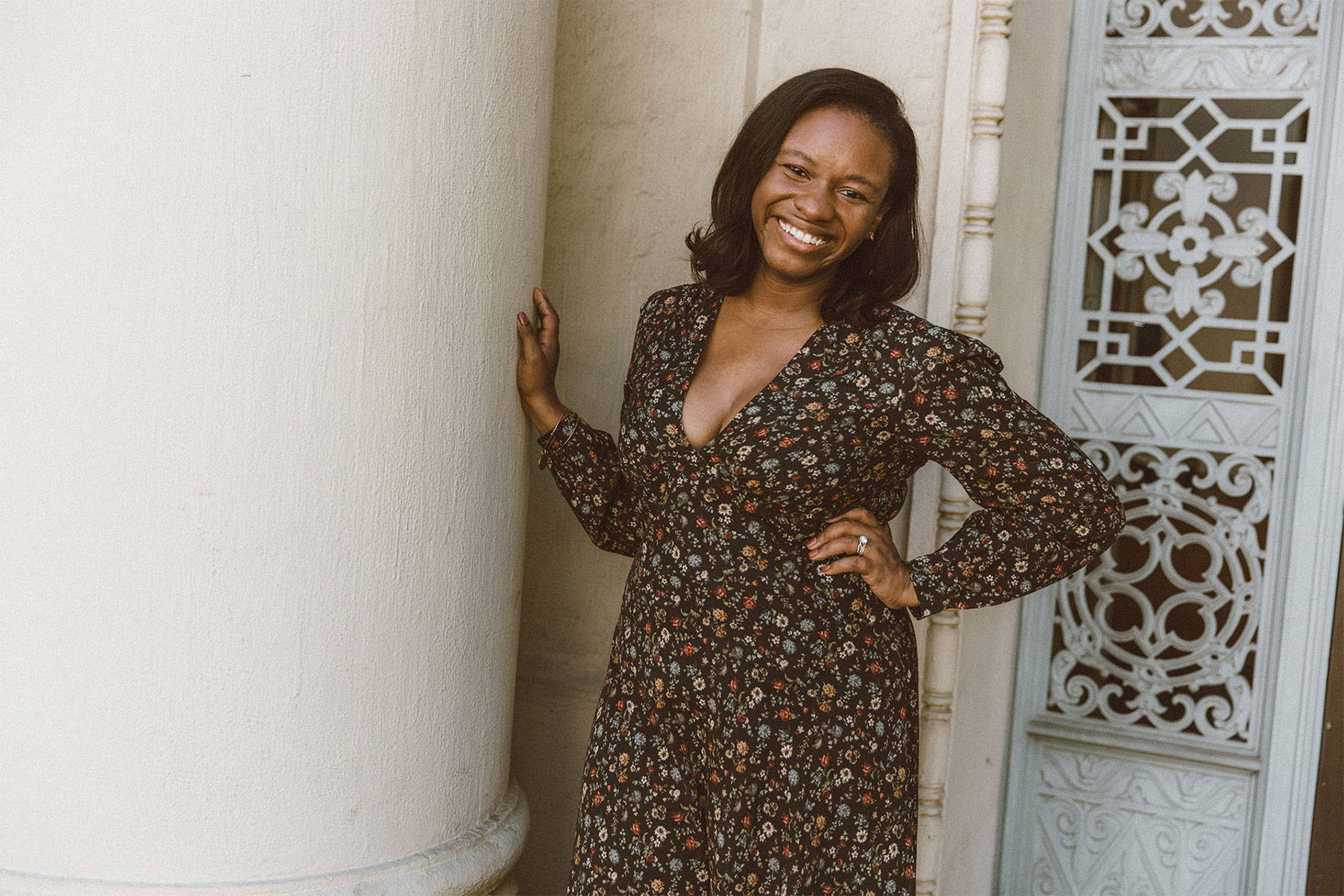 How do we go about actually providing services for homelessness? What is the obstacle that seems to have occurred where this problem has gotten worse, and how can we change that so that people can get homes and services?

"I'm all about following the money. I’m the Treasurer for the Budget Advocates, and what we do is we go and take a deep dive into the city budget. For the homelessness issue -- and what I think is the case for the most of the issues -- it’s about making sure that money gets to where it’s supposed to go -- and currently it’s not. That is where I stand on it: Really holding people accountable -- saying, “No, this money is not for consultants, we have a homelessness crisis.” That way, we’re able to start giving people resources, and opening up mental health facilities. The money is there -- it's just that we allocate it to the wrong places." 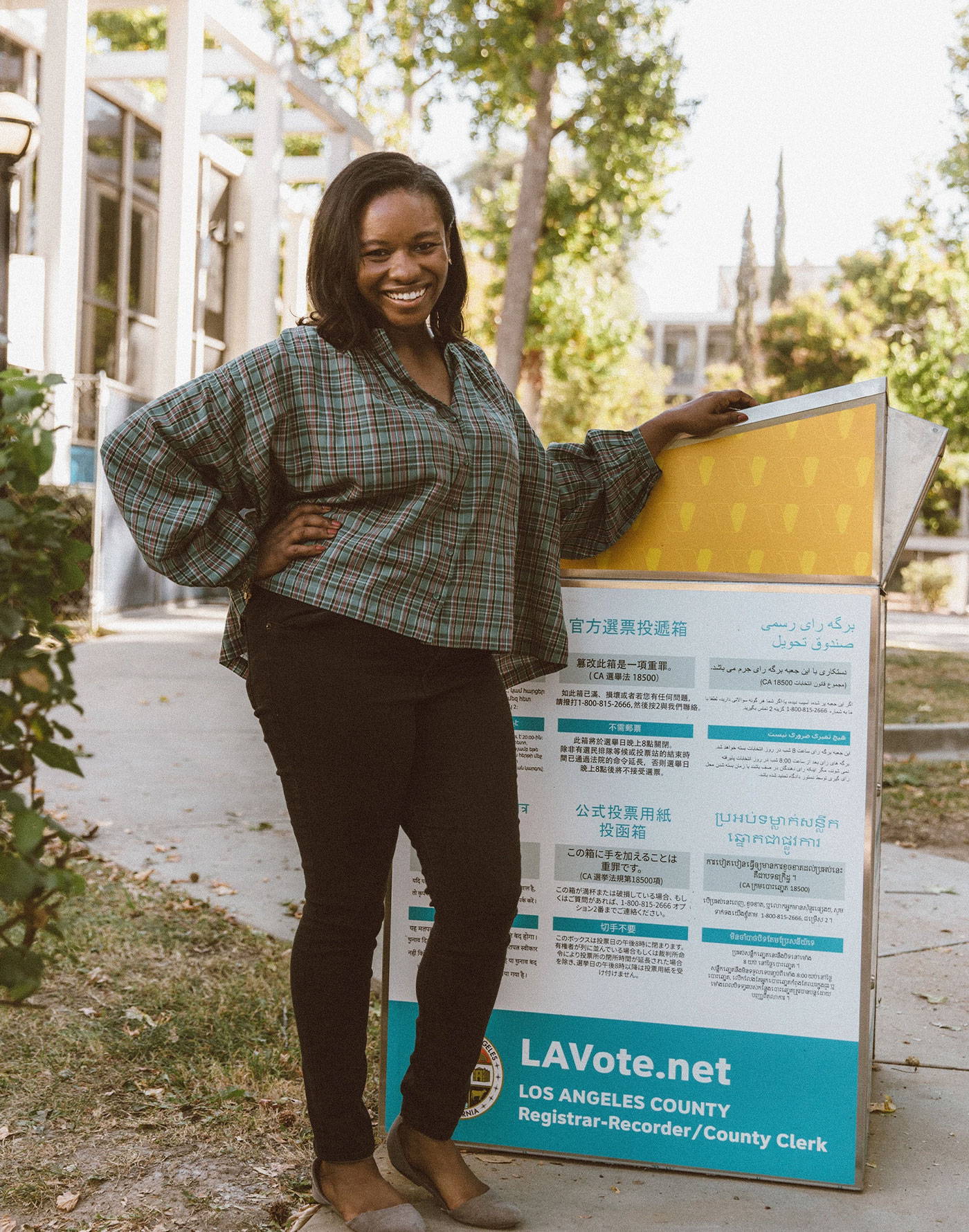 "I do not think that we are educating our children very well. I was a teacher: I had to bring in my own materials to my science class because I didn't have microscopes, I didn't have beakers, I didn't have test tubes. So again, like I said: We need to make sure the money is getting where it's supposed to be. Money that has been earmarked for education and is too often reallocated to the general fund to help make up for shortfalls in other areas that were created by other issues. We need to stop doing that. Our credentialing programs need to be addressed for teachers and administrators. There's a long list of improvements that we need in our public education system -- but my top priorities are making sure that teachers are well-prepared in the classroom and feel supported, ensuring access to resources for all students. There are kids going through our system that have never met a librarian, a counselor, a nurse -- anyone who's not a teacher or principal or assistant principal -- and, lastly, making sure that we're grading on mastery and not on a completion basis." 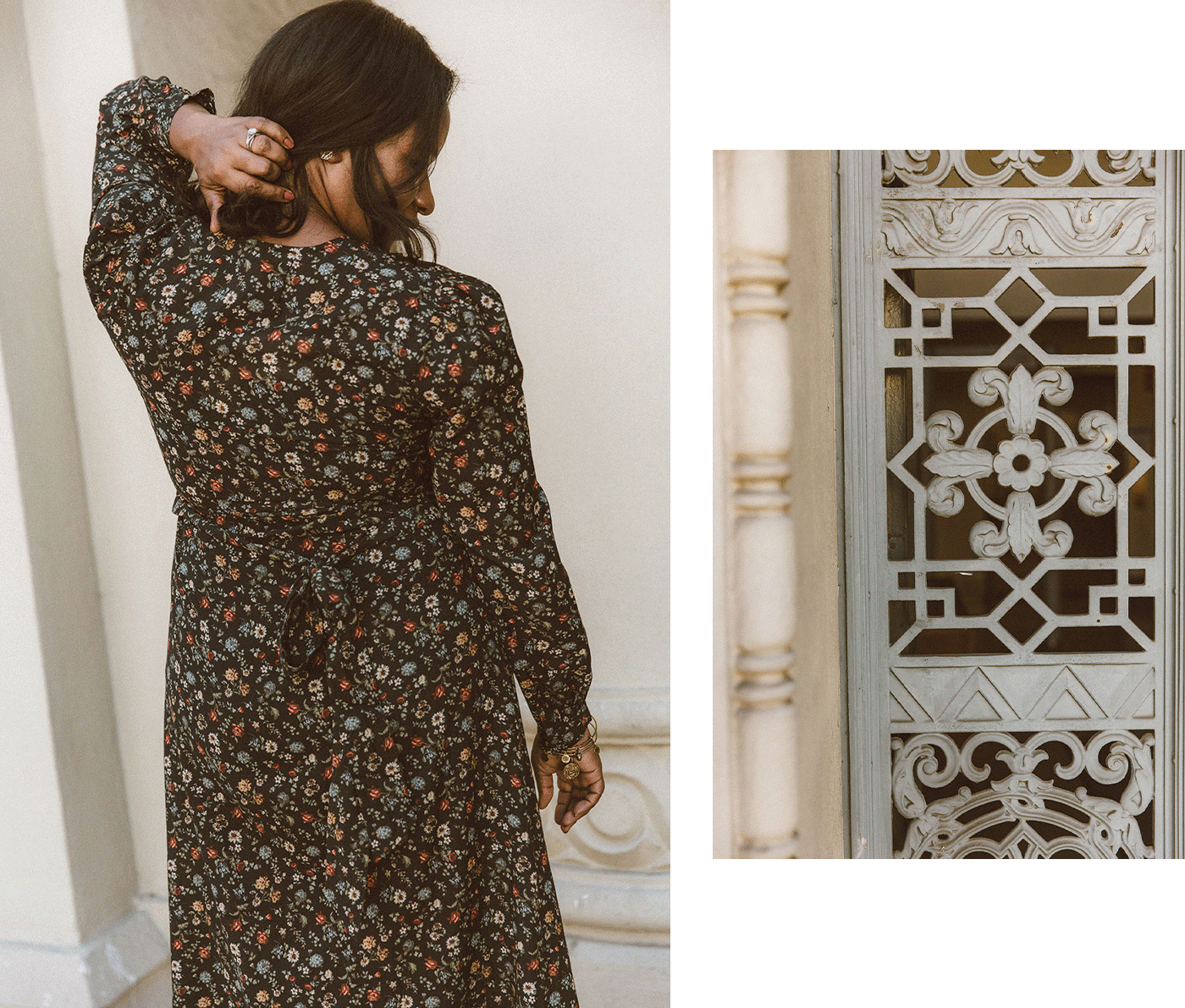 What is your vision for a public healthcare system?

"I'm definitely a proponent of Medicare for All; I'm really excited that people are jumping on this bandwagon. I do not believe that your access to healthcare in the richest country should be based on if you're employed or not. I do think we can create Medicare for All -- and I think that it is feasible to fund it by moving around funding from different places. In the short term, we are focusing on making sure we are holding this industry more accountable by requiring insurance companies to stop hiding mental health services, which is something that they do; making the pricing of prescription drugs more transparent; and providing healthcare coverage for all children regardless of parents’ job status or income." 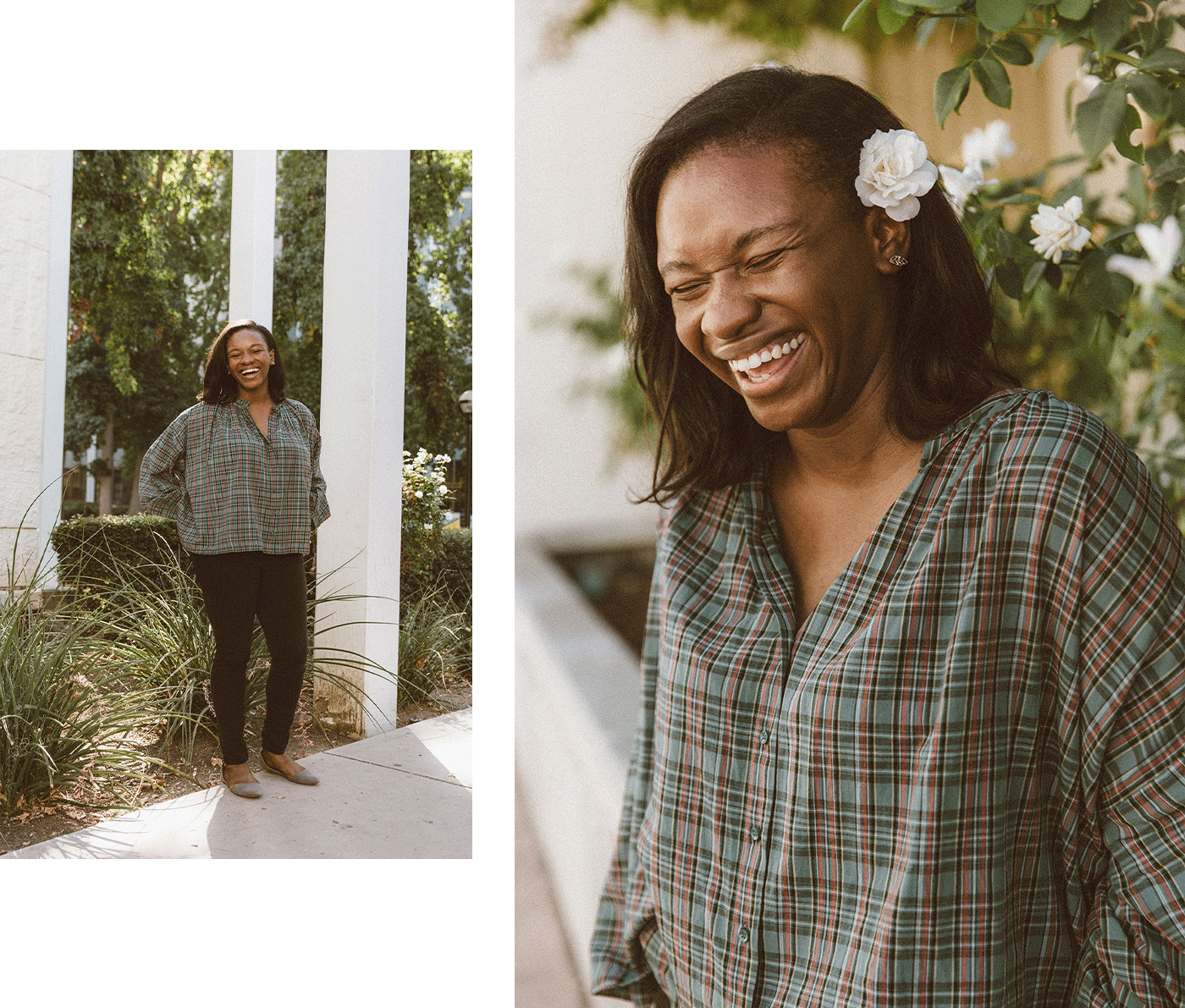 Something I didn't learn until a few months ago was how overly funded the police department is and we're very interested in the Defund the Police movement and big proponents of that. Can you talk a little bit about criminal justice reform?

"I've started saying “budget cut for the police department.” I admire police officers: They have a very difficult job. They have a job that is, in my opinion, undoable. We are calling them for things that they shouldn't be doing: Animal control, dealing with mental health issues, dealing with the myriad of things that they're called for that really aren't in their job description but because they are consuming so much of the budget and they are the first responders. I believe if a cop is acting inappropriately consistently, and they have an issue they have consistently not addressed, we should be able to take your badge …. Also, if they have a history of nefarious things -- that record should follow them. The officer should not be able to move a county over and be hired with no background check. The budget … it's ridiculously enormous, and we wouldn't even be talking about 50% cut, but 12% -- and we would be able to reallocate it to services that should be able to come and support the police officers in situations where they shouldn't actually be the first responders." 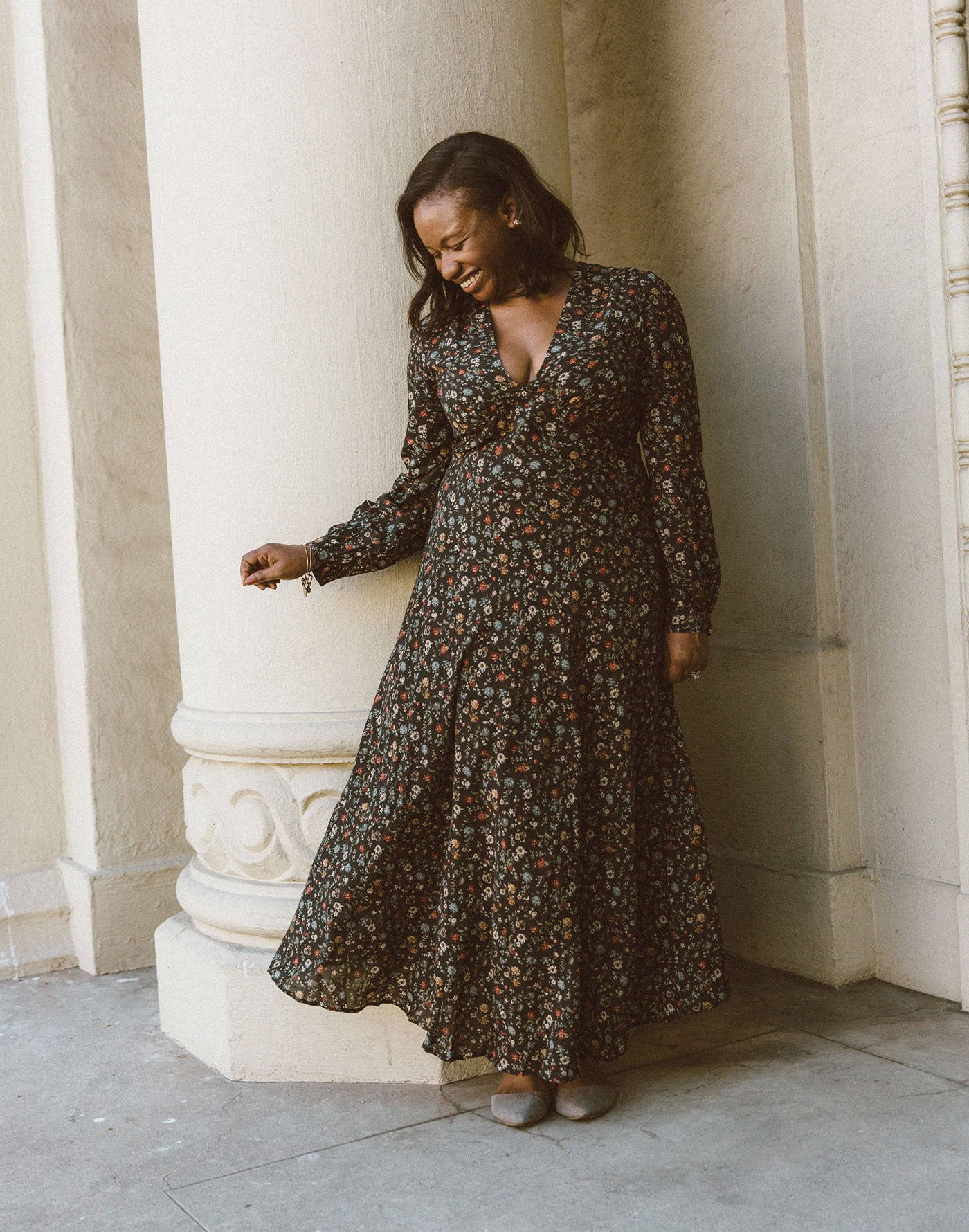 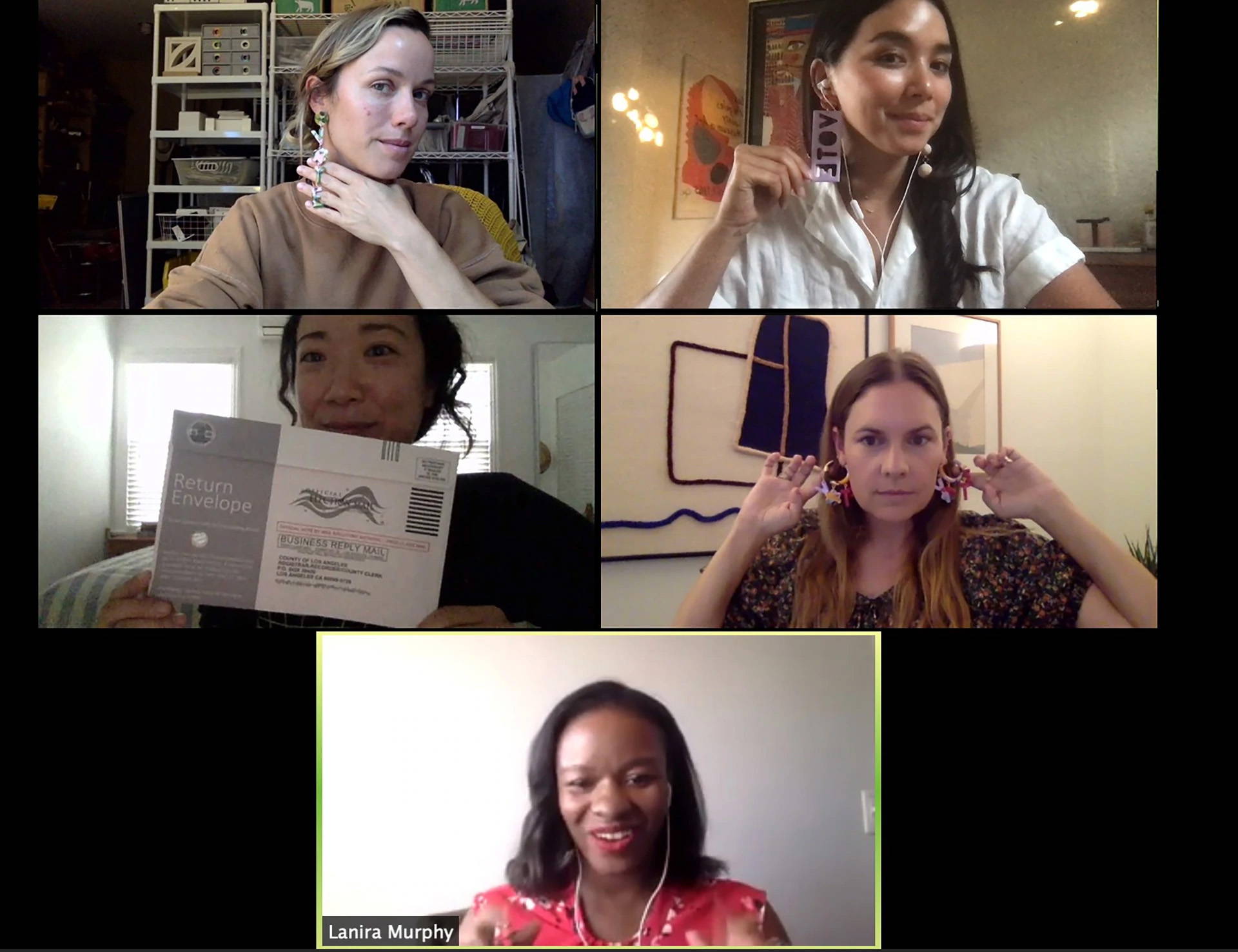 A snapshot from Brady and Katy's Zoom call with Lanira! Featuring the VOTE earrings that Wall for Apricots designed in collaboration with Lady Luck Concepts!