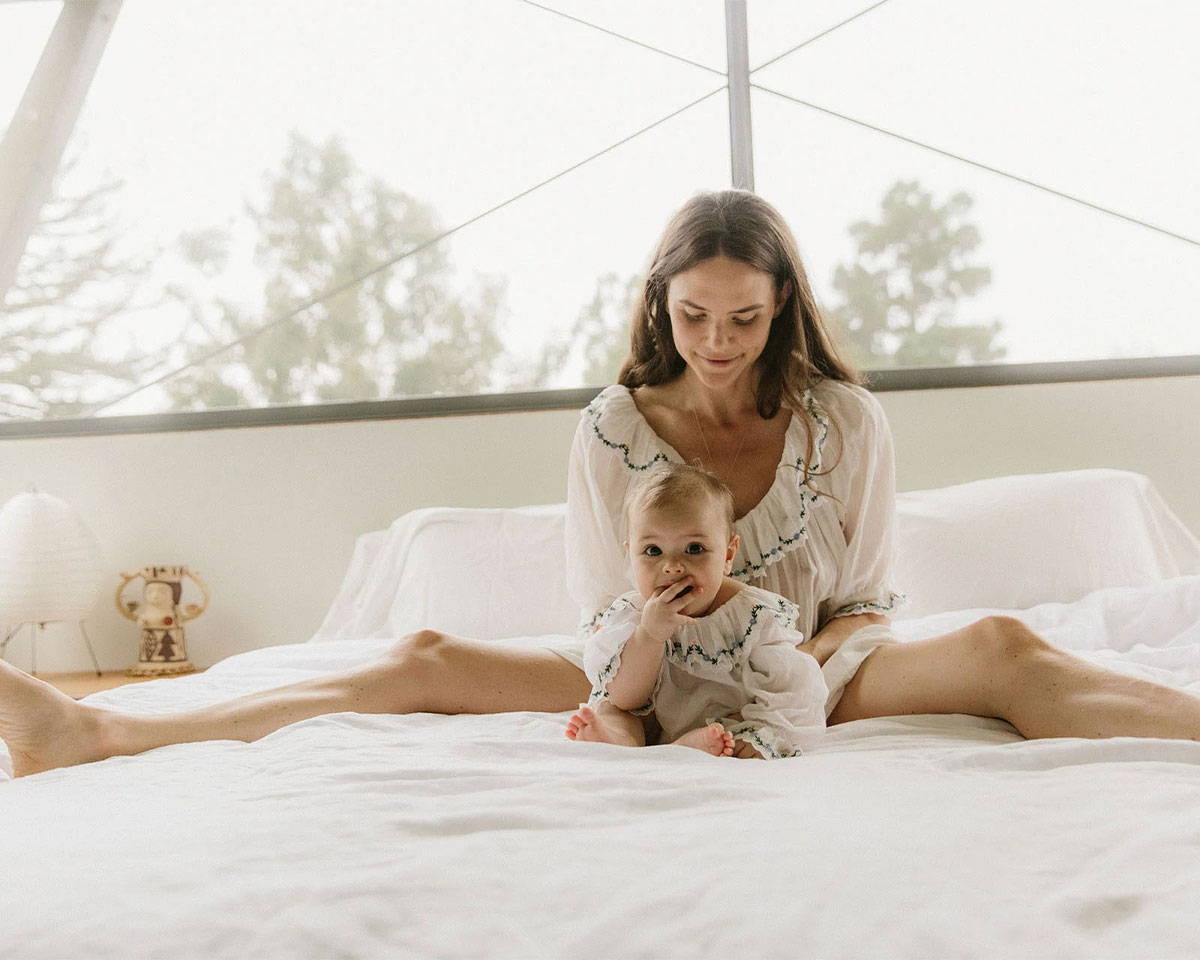 The singular and undeniable magic that Amanda possesses can only be described as alchemy: some divine combination of strength and softness, nurturing warmth and innate honesty, insight and intuition, vision and intelligence. Alchemy, in many ways, defines and describes all that Amanda does - from the way she so seamlessly melds science and ancient wisdom in the creation of her adaptogenic Moon Juice potions (full of wonderfully potent medicinal herbs and plants), to the bright spark of connection she fosters with her husband, Gregory, and two children, Vajra and Rohan, one defined by passion and loving care in equal measure. It is a wonder to witness the balance that Amanda brings to all that she does, as she so gracefully juggles a thriving and ever-innovating business (at any given moment, she and her team are likely writing a new cookbook, developing a new cutting-edge supplement, or recipe testing some delicious Moon Juice morsel), a new baby, a soulful partnership with Gregory, and so much more.

And on top of all that, Amanda has somehow managed to have been an ally in every difficult moment in my life over the past few years - supporting, encouraging, guiding and, in her kind and candid way, offering up just the right words of wisdom or exactly the right remedy (she has made me custom blends and prescribed regimens for everything from postpartum hormonal imbalance, to an everyday cold - always there, always ready to help). Insights and advice on all things business, motherhood, and womanhood flow freely between us - a generous and reciprocal relationship that I treasure beyond any measure. I have learned more than I can say from knowing Amanda and watching her move through the seasons of her life - traversing new phases in the growth of Moon Juice, transitioning from being a single mother to having a partner, and recently having her second child. Below, she shares her perspective on this most recent chapter of motherhood, reflecting on the value and beauty of her experience of both single motherhood and motherhood with a partner. I am so thrilled to finally feature Amanda here on our Journal, and hope that in reading this you gain some small fraction of what I have gained from having her in my life. See below for photos of her and her sweet sweet family at home in their canyon love nest!

"Single Mothering was boot camp for unshakeability. When I realized I was pregnant, I knew ultimately I would be doing it alone. I lived with a fear in my pregnancy that I carried into Rohan’s birth. I was young, naïve to what being a mother would entail, and starting a business that was set to open within weeks of my due date. The moment Rohan was born and I looked into his eyes, fear was replaced with ferocity. My first lesson in healing as a mother was to advocate for and protect my baby in ways that I never would have for myself. Decisions that seemed impossible during pregnancy became swift with my baby in my arms. My mission was clear and all-consuming: keep my baby fed and soothed to the best of my ability (he was colicky and cried a lot those first months) and get Moon Juice open and running. I did it, we did it. It was gritty. Vegan ice cream and seaweed on the floor while working was dinner, I co-slept/no-slept and nursed all night for years, I would run out of toilet paper for days and lightbulbs would go out for months, I was sure nobody would ever love me because I was a single mother and I brought my auto-immunity back online, but I moved deeper and deeper into strength. Sometimes we read these stories of growth by fire and envision others finding their strength in a better way than our own, a more heroic, cleaner version. That’s just a fantasy. Anyone who reports being pushed beyond what they feel they can manage goes through hell. It’s easy to put hell in a convenient nutshell when you’re in the clear. That’s what I’m doing here.

It was a five-year adventure with Rohan. Our little family didn’t look or feel like anybody else’s. In some ways that was liberating. I got to adore my baby with abandon. There was little structure and nobody else to consider. It was the two of us in our love bubble, creating a bond that we carry with us today. In almost equal measure it was excruciating, there was no one to share the joy of motherhood with, there was no one to take over if I got sick, there was no one to grab groceries at the end of a long work day, there was nothing beyond my nervous system to prop us up. It forced me to lean into God in a very practical way. God could no longer be out there and called upon for fancy occasions, it needed to be in here, with us, everyday. God energy didn’t save me from showing up late, teary eyed and feeling like a delinquent every morning to school and work. Or on weekends fatigued to the bone, fielding tantrums and not knowing what I was doing. It was gruesome and extraordinary and I survived with unwavering faith in something bigger than the two of us. That’s the only way I continued to get up and do it all every day.

I am living something very different today. My husband came and found me a week after I had been standing in the shower and felt the truth and excitement in my body that I needed nothing from a partner and that I had a lot to share. It turns out that was true and at the same time my husband has given me more than I ever thought I was worthy of in this life.

Gregory arrived into our lives and brought a mother and a father. He is the Pa energy I had never known. He is living, breathing, and loving masculinity. Potent, steady, strong, kind, patient, structured, practical, methodical, fearless and purpose filled. Being held in his field I broke in all the places where I had become hard to keep the show on the road. In his arms, I could cry myself into the Ma energy I had not fully been. We became a family with a mother and a father. I started to sleep eight hours a night, we sat down for dinner, he thought it was cute that I couldn’t change lightbulbs, our house started to feel like a home and Rohan blossomed with an alpha father and a secure mother. Rohan still reminisces about the days before “Greggy”, he will remember how terrible the school mornings were with a laugh and when Vajra was born he began longing for the undivided intimacy we once shared. All this exploration feels like a luxury enjoyed upon the back of our strong man.

Vajra was born last summer solstice. Her birth was the highlight of my life, it was my rebirth. An opportunity nature gives us when the stars are aligned and you can birth alone, together, in the dark before dawn, with the same connectedness and intimacy you had when conceiving. That was six months ago. I don’t know who I am becoming, but it feels new.

In moments when it's painfully clear life is out of my control I find myself comparing “apples to apples” now that I am experiencing the postpartum year again, but with a husband. There’s nothing worth reporting from these comparisons. It’s obvious, surface level, overly simplified equations that try to make order of all that is on the table. Like, I have an incredible amount of help now with a partner, but I must rise into a new level of communication, and so does that net out to be the same amount of effort in the end?

The gross nature of the struggles I encountered with Rohan’s birth have been replaced with an invisible challenge of the self. I am loved, I am safe, I am healthy, the lights are always on. I have everything I once dreamed of and more. We have built an incredible team at Moon Juice, I was surrounded by the best support during pregnancy and birth, I was cared for impeccably for the 40 days postpartum, my children are healthy, I am married to the greatest man on earth and my home could not be cozier. This, thank God, has not been the end to grit, the way I once imagined it would be. I now get to experience a refined chaos into clarity momentum.

It's futile to try to compare a previous self to the current self. I don’t believe time or life is linear. I can’t go back and reflect on life a decade ago in a scientific way. Time is alive. The past and the future are always shifting. What I can report on though is that motherhood is the most rigorous practice I have encountered and nobody gets off the hook. That’s the gig and we must push ourselves into grace and gratitude when meeting it. Wherever you are it will find you, break you down and if you can keep up, it will build you into the strongest force on earth, the mother." 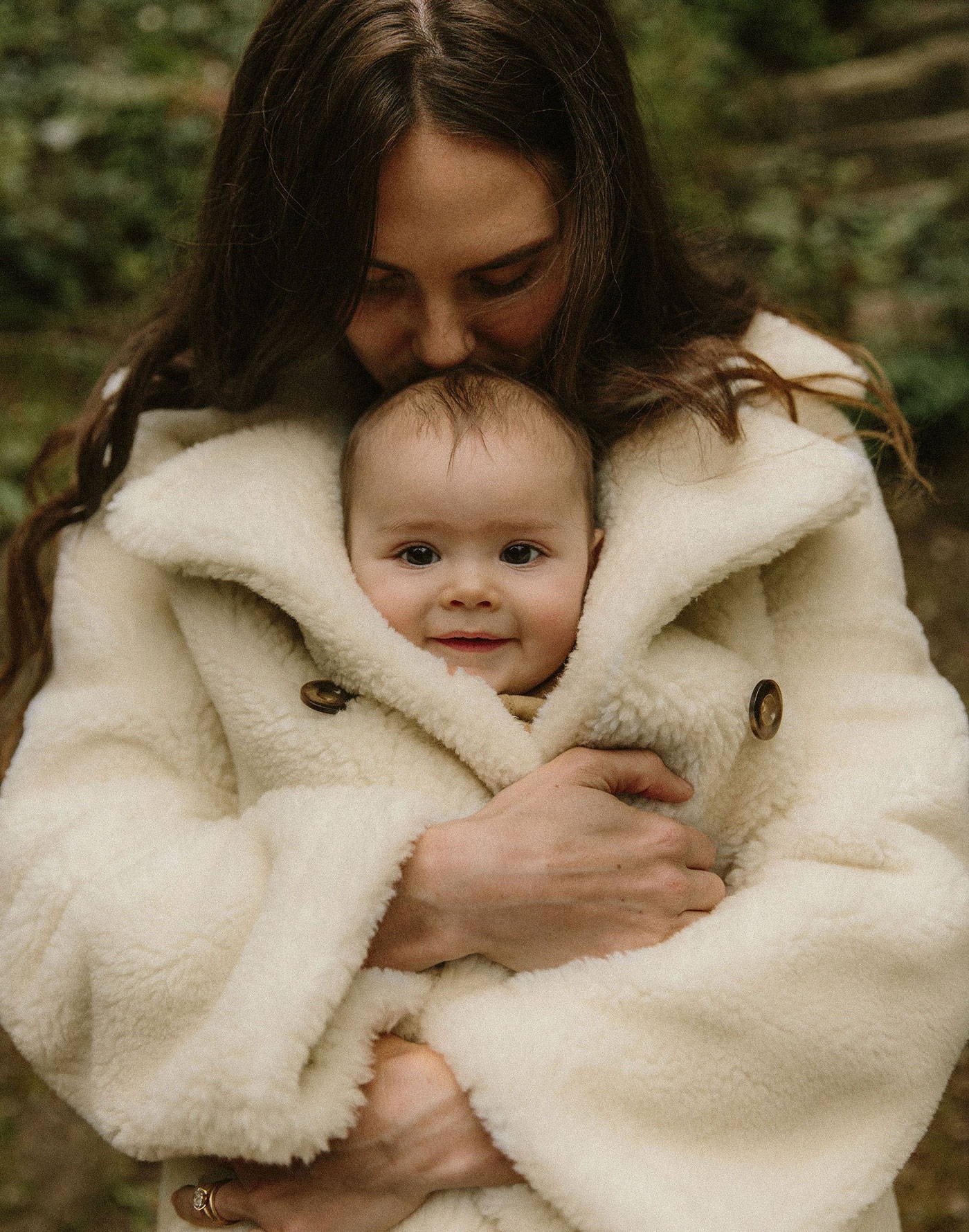 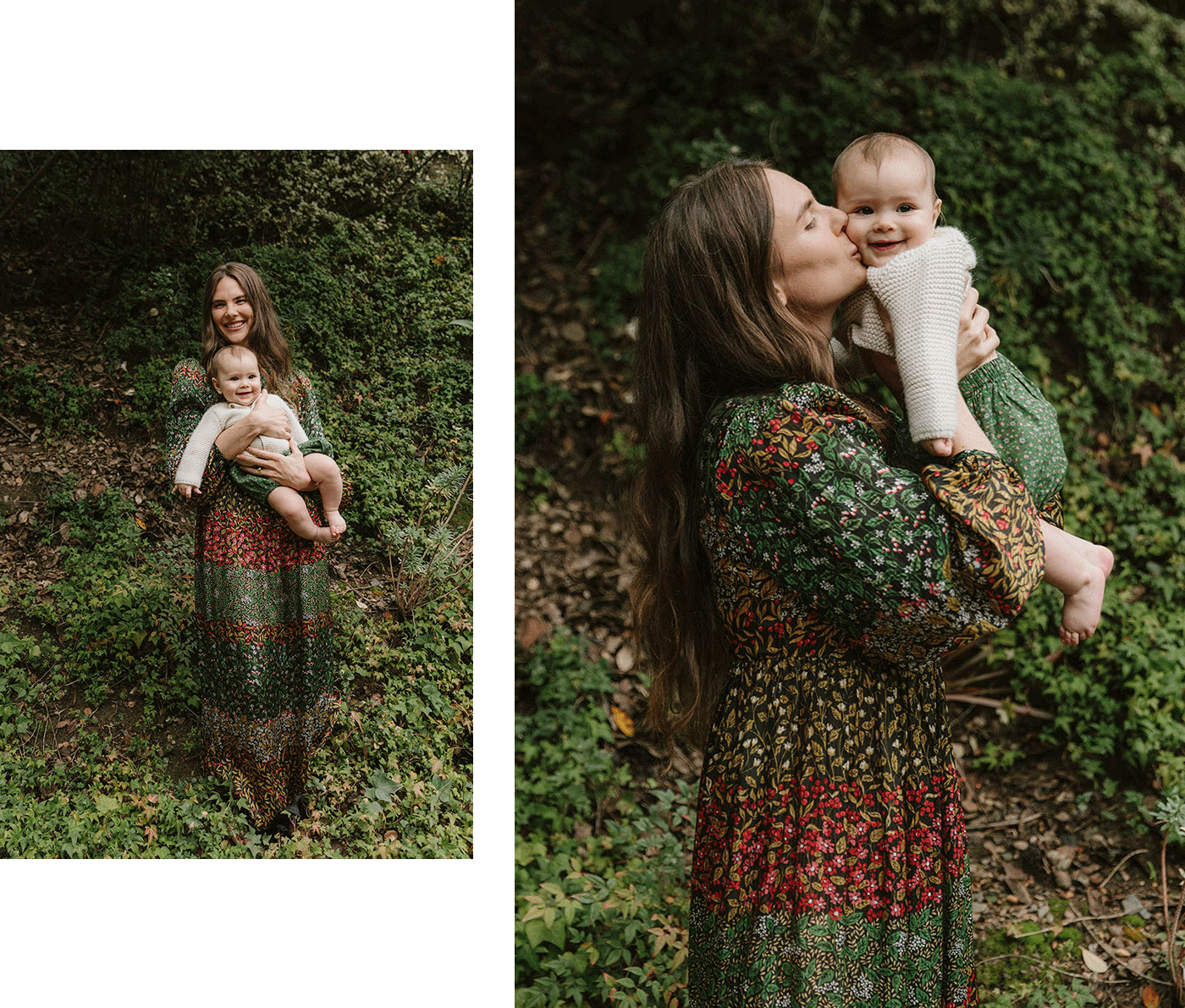 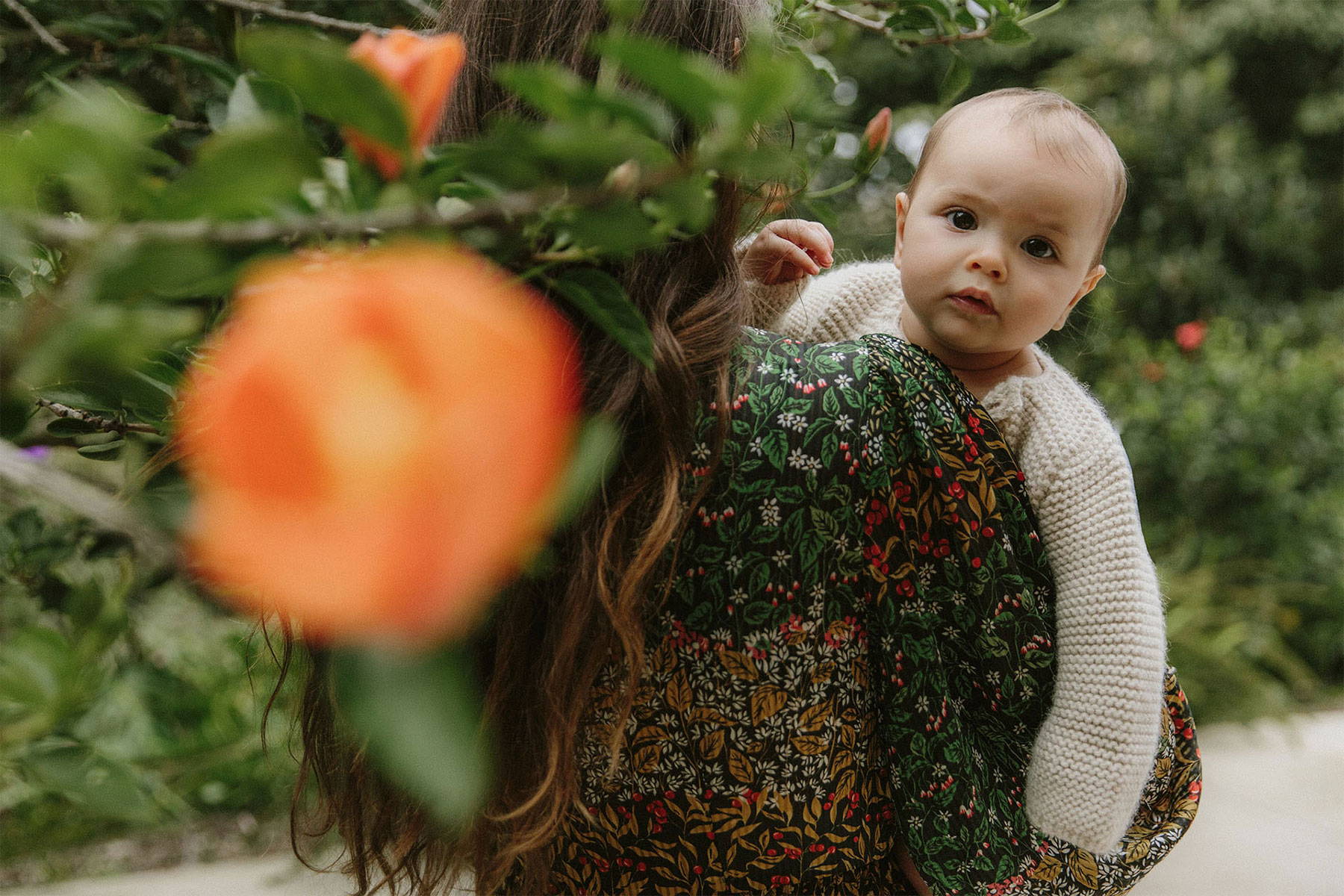 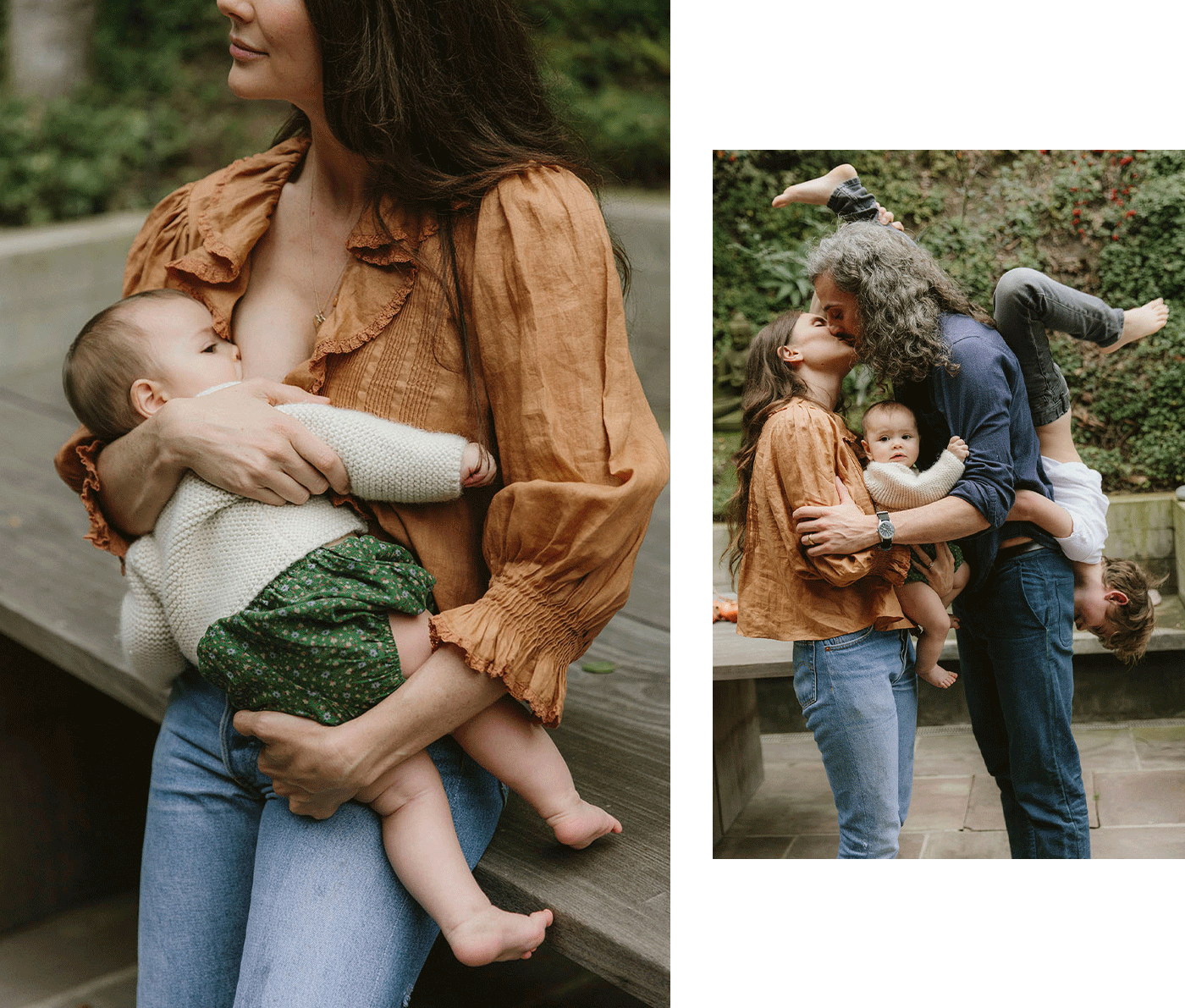 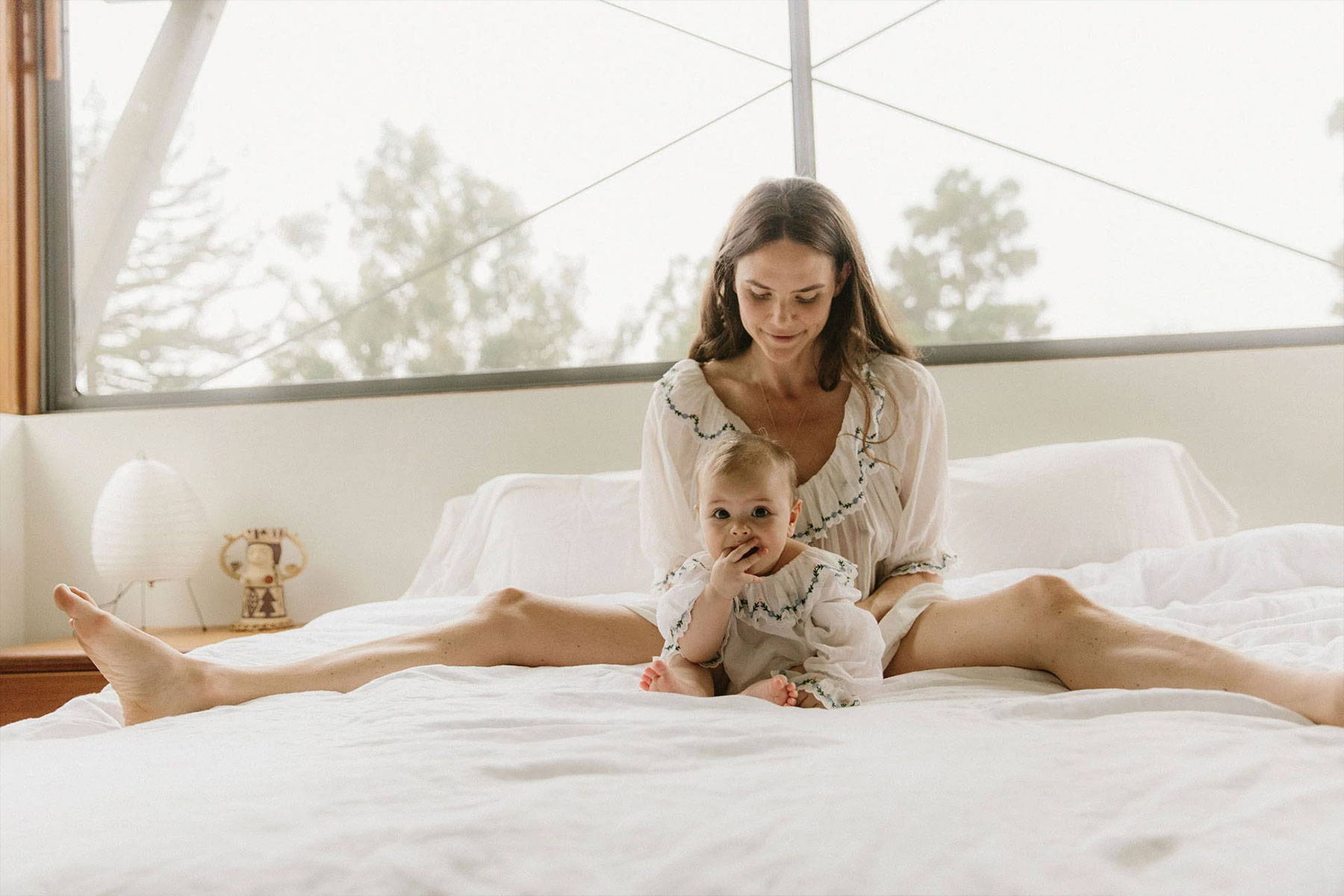 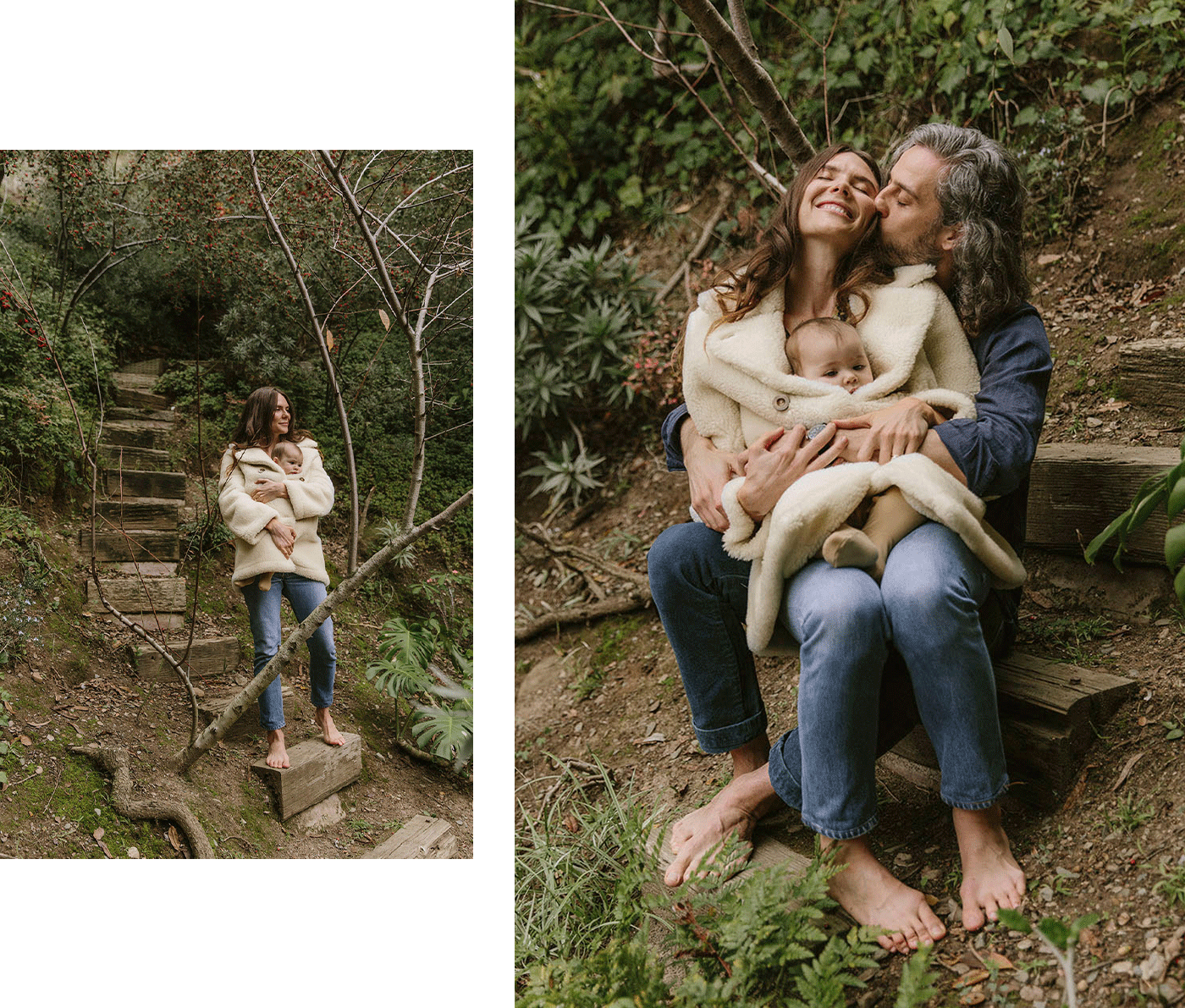 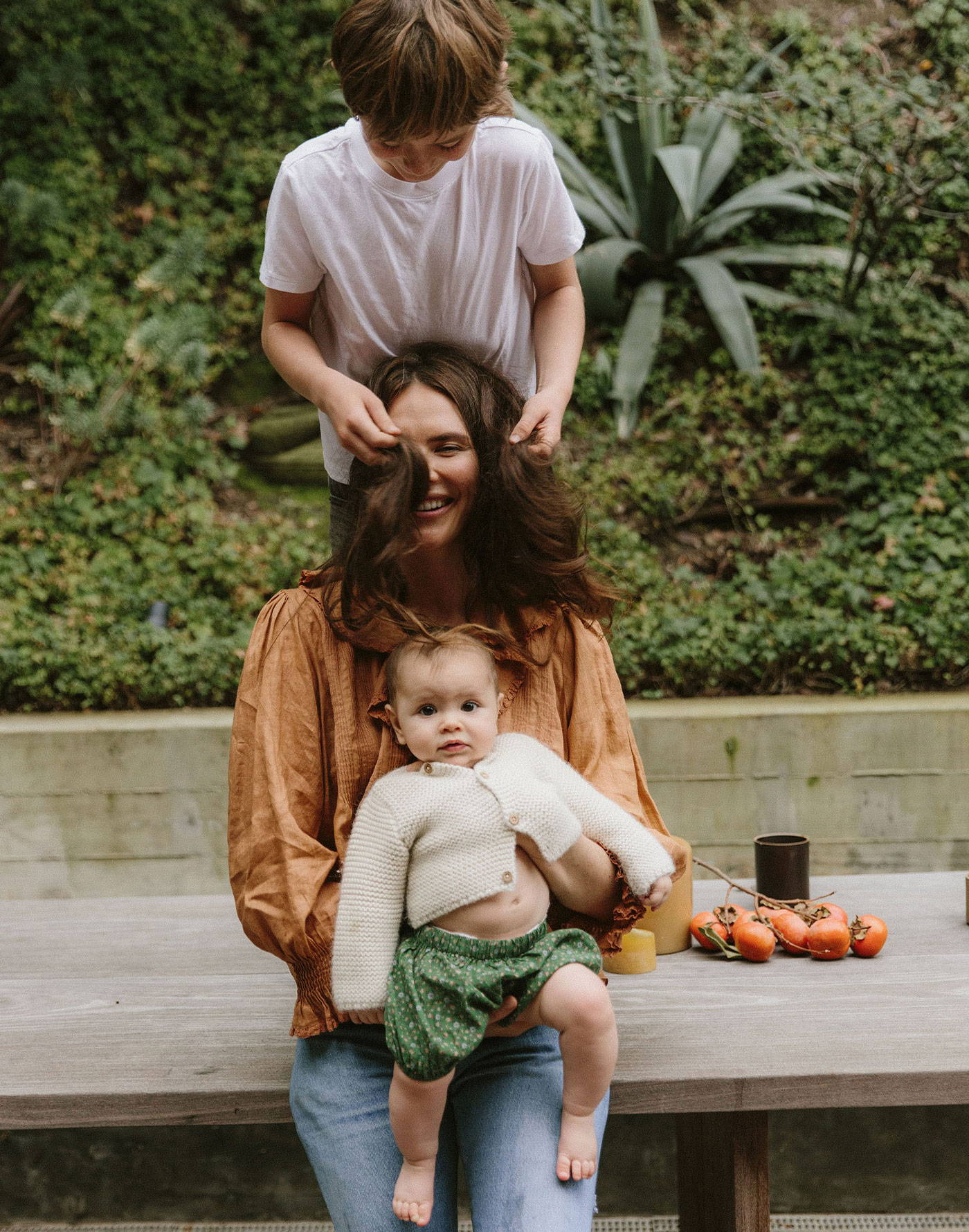 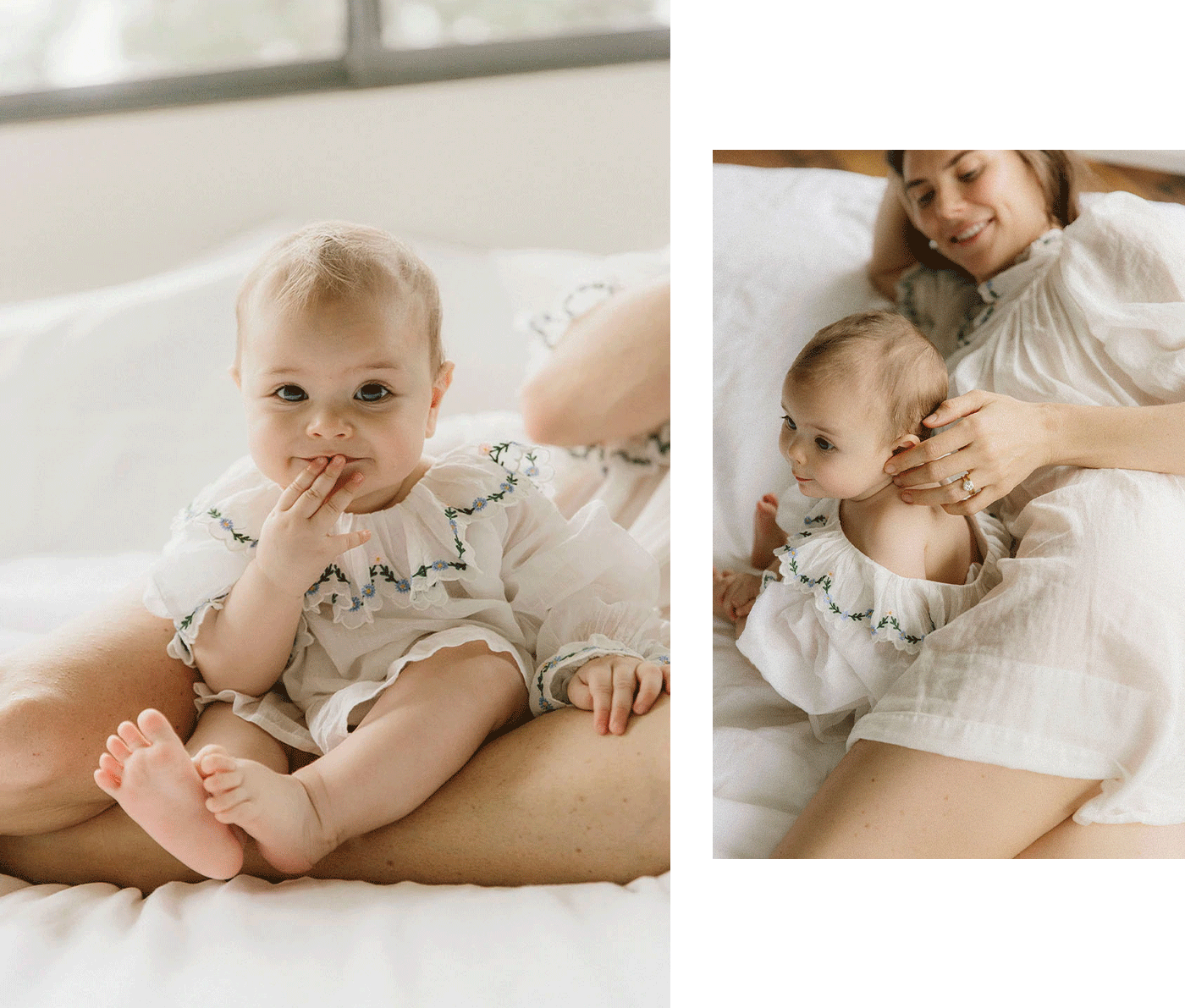